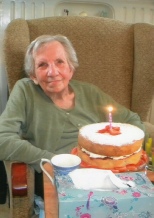 Lily was born at home in West Ham East London on 24th December 1919, the only daughter of 5 children to Louisa and Mervyn Holding. She lived in a house with her parents, her beloved brothers, Charles, Tom, Albert and Eddie and aunt, uncle and two cousins. She was the only girl amongst so many boys, I’m sure she got into lots of scrapes with them as a child.

She was hugely proud of her eldest brother Charles and all he achieved and regaled everyone and anyone with his story.

Her youngest brother Eddie was the apple of her eye, he followed her everywhere, I was never sure if she loved or loathed it. But I know there was always a sorrow in her heart after he was killed in India in the Second World War.

Albert who was taken from the family and put in a home in South Ockendon when he was very young, and the last Sunday of every month we would visit him and she continued to do this right up until he died in 2006. She always made sure she got him the sweets he loved and sat with him.

Tom who was disabled after a fall when he was a small child, she always helped and cared for him too.

Mum had to leave school when she was 14 years old because her parents couldn’t afford to let her stay on. Her first job was in a factory, printing books. At the age of 20, she joined the Civil Service, in the Post Office section. She was exempted from the armed services, as all the men were called up and the women were needed to run the Post Offices. When she married, she couldn’t stay in her job, as female civil servants had to leave when they married.

She met my Dad at a dance during the war. It was in an underground hall, the type of place where many dances were held while London was being bombed.

The house next door to where Lily lived in West Ham took a direct hit from a bomb. All 11 people in the shelter were killed and mum and her family were buried in their air raid shelter; they were trapped in it and had to be dug out. The popular cocktail cabinet was lost and she felt this loss more than her disabled brother’s boot that she had thrown out because it smelt. Their poor chickens were up in the tree ready plucked!! That’s how mum and her family came to live in Barking, and where Josie and I lived as children in a tiny house in Tanner Street, with mum, Dad, Nan and our uncle Tom.

She was a great mum, great cook, great seamstress, making Josie and me many outfits, and a great pusher of cars.  “Get your back into it Lil!” was one of many great quotes from Dad, as the car broke down yet again. “I’ll steer and you push”; and she dutifully did. On our epic days out, which always seemed to start at 4 in the morning, mum would always have the Gaz stove at the ready to cook eggs and bacon for breakfast. Map reading too was a job delegated to mum, with the much-used cry from Dad as she said, “We need to turn off here”, “Bloody hell Lil, too late!” as we sped past at 15 miles an hour. She never said a word, never argued with him never shouted, always the lady. When she decided she wanted to learn to drive Dad took on the role of driving instructor. I’m not 100% sure what happened but Josie and I spent much of the time under a blanket in the back of the car with Dad shouting instructions. But she did pass her test, despite, not because of, Dad’s tutoring.

Christmas family get-togethers were legendary. I just remember everyone coming to us when I was really young, music, dancing and laughter, celebrating mum’s birthday and Christmas all in one. These seemed to continue until Josie and I were adults. Mum was always rushing around cooking and cleaning, singing while vacuuming.

I worked with her for a couple of years at “Save and Prosper”. We became great friends, going to the theatre, cinema and at any opportunity going out for lunch or tea and cakes.

When she retired, with Dad she would go on “merrymaker trips” run by British rail, which involved days out or weekends away. Josie and I never knew where they were; this was before mobile phones. When they returned, “Oh we went to Hadrian’s wall, the Scilly Isles, York, dear, had a lovely time didn’t we tell you we were going?” Often or not they would have mum’s brother Tom with them or Kath and Fred.

In recent years we have enjoyed our long weekends away, with June and Paula and Angie and her family with more of us each year, to various places in Norfolk for family get-togethers.

We only had to say to mum we were going out today and she’d say I’ll be ready in half an hour. In which time she would have made salmon sandwiches and fruit cakes.

She happily made the teas at the toddler group on Tuesdays, bring goodies for Ruth and me, never refusing to help with anything, at “Whizz-bang” looking after the boys when they were too young to attend, and sometimes helping Kathy and her refreshments team.

I think everyone will have a Lily memory of Clacton. The “Mums and toddlers” annual outings on the red bus, she always came with cakes and stuff for everyone. Days mostly spent in the wind and rain regardless of the month we went.

As all our children got older we formed a splinter group with Ruth, Katheryn, Loretta and their families and many a Saturday we went off to Clacton with mum clutching her sandwich and cake boxes. This was right up until a couple of years ago.

But more recently we would put her in the back of the car, propped up between Len and Josh and go off to Southend for fish and chips. Even the week before she died, Ruth and I were planning our next Southend outing with mum and her face would light up when we talked about going.

She had a couple of trips in the past year to our family in Norfolk and she enjoyed the outings, sitting with her J20 with people chatting to her. No more Gin for Lil by then, it had been her favourite tipple, “Luscious Lil” the Gin queen, we named her.

She was a great Nan too. She was the only Nan in her 80’s who knew and understood how to play top trumps. She could sword fight, name dinosaurs and play hide and seek. She loved playing cards, affectionately known as Shanghai Lil, owing to the fact she seemed to beat us all on a regular basis. She had her own “Mii” on the “Wii” and was champion at bowling on it. Josh remembered the other day Lily in her nineties, by then bowling on it so slowly but still managing a strike. Recently she became renowned for her snakes and ladders wins. I know Josh and Dom would come home after a visit saying, don’t know how she did it but she’s won again.

What else can I say? This is just a small part of an amazing person’s life and only my take on it. I’m sure you all have a story in your head about Lily.

Even after the terrible things that happened to her 2 years ago, where she suffered abuse and neglect at the hands of hospital staff, she held herself with grace, dignity and her usual smile and royal wave. And, when she went into hospital this January, after wonderful birthday celebrations and a family Christmas, she recalled what had happened to her in the other hospital and was so distressed; I think that was just the start of her final decline. She spent the last few weeks in a nursing home, giving us the opportunity to spend lots of time with her in a caring environment where she was given 24-hour care. But I think she knew it wasn’t her home and she never really recovered from the pneumonia. She fought a good fight, she was a tough old bird, but she was worn out in the end and it was time for her to go home.

I thank God for her and I thank God he took her peacefully in her sleep.

The past 2 years wouldn’t have been possible without all the love and help from so many people.

The wonderful carers who looked after her when her wave meant I don’t want to eat, to seeing her the morning of that awful burglary, to taking part in the vast improvement over 18 months, that saw her able to sit in her chair and enjoy her music again and cake.

Lily’s and my wonderful friend Ruth who has been like a daughter to mum; cake-sharer and teeth-inserter, and ring-finder and general “good egg”, who with Frank, her husband, sat on the floor for over 2 hours with her waiting for an ambulance one evening. Ruth has been there for me and Lily every day wiping my tears away, and the joy and laughter the three of us shared. The carers’ carer!!

Mary, who sat with Lily for hours, worried about waking her up and when she did wake, playing snakes and ladders.

Alex for looking after her feet and hands, getting doctors and nurses to listen when mum needed help; my lovely sister-in-law Jean, who would patiently sit with mum, helping her to eat and drink.  When mum didn’t know who anyone was, she knew Jean.

To Sarah Toulson, from Age UK, a new friend to us who listened and advised and put up with me and my tears also making the last few months easier on mum.

Josh and Dominic were also always there for their Nan; helping to lift her, putting her coat on, wheeling her to church in the wheelchair and giving hugs.

Lastly, there was my mum’s great love for Len, from the day she interrogated him as to his intentions towards me to her last breath, Len was the only one for her.  When I answered the phone saying, “Hi, mum”, she’d say, “Is Len there?”  He sat with her every evening for the last 18 months feeding her and getting her to enjoy her food again and slept on the floor when she was burgled or ran over to her place many times when she thought she was unwell.

The support of so many over the last 2 years kept Lily with us and all should feel a little bit proud for making her life brighter and more joyous.