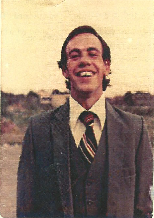 A tribute to Russell

Russell Simon Merritt was born in Queen Mary’s hospital Stratford on the 1st September, 1959. A lovely baby and the apple of his dad’s eye. He was baptised in St Mark’s church, Silvertown, the church where Ernie and I were married in 1955. From a very early age, we realised that he had speech difficulties; a social worker suggested he be put into a mental institution. I said ‘no’; he’s my cross to bear and no-one is going to put him away. He was unable to speak at the age of 5, only make sounds, but I knew what they meant. However when he started school at Woodlands School in Loxford Lane, the head mistress was shocked that he could not speak, but seeing how upset I was, she made arrangements for him to attend a speech therapist near Valentines Park, where I took him twice a week. Progress was slow; however, it was progress. He went to various schools, and eventually Day Centres. When asked where milk came from, he replied, as all his colleagues from Sainsbury’s will know, “the fridge” – which of course caused a titter.

Just before he was 30 years of age, he was sent to Tesco’s at Gallows Corner for 6 weeks training as a trolley boy, nowadays termed “trolley retriever”. When the six weeks were up, they had to lay him off as they were ‘not doing their figures’ and staff had to go. But true to the manager’s word he got him a placement at Sainsbury’s, Ilford, and that was the making of him. His vocabulary improved and he started to be a little more independent.

The staff at Sainsbury’s were very fond of Russell; so too were the customers who used to buy him chocolate, crisps, all sort of things – perhaps they thought I wasn’t feeding him. He loved his job and always tried his best. He had completed 25 years at Sainsbury’s and was due to receive an award in recognition of his service at the Royal Lancaster Hotel later in September.

He was also a keen Elvis Presley fan, and for the past 20 years or so we have taken him to the week-long Elvis party at Great Yarmouth; we even took him to Memphis to see Graceland, Elvis’s home, which he absolutely loved. This year’s Elvis Party was booked and was to take place on 6 September, but sadly on the 13™ August, 2014, Russell passed away in his sleep. He would have been 55 on the 1st September.

He is deeply missed by not only us, his parents, but by all who knew him. He was a special son, very loving and we are very proud of him and his achievements.

May God take him into his loving care.

God bless you son, we shall always remember you and your great sense of humour.